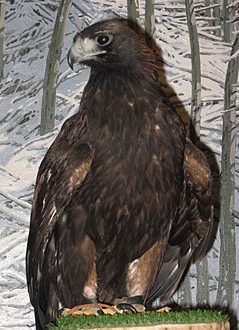 Distribution: Year round, Golden Eagles can be found throughout the western United States and western Canada down through parts of Mexico. In the summer, during breeding season, their range extends to some scattered parts of eastern Canada. During the winter, the range in the United States broadens and they can occasionally be spotted throughout the country except in the Deep South.

Size: The Golden Eagle is a very large raptor. It ranges in size between 28-33 inches in length and can have a wingspan just over 7 feet. It can weigh 6.5-13.5 lbs.

Diet: Golden Eagles prey mainly on small to medium-sized mammals such as prairie dogs and rabbits but also rely on other birds and carrion for food.

Lifespan: If a juvenile survives the first year, it can live to be 30-38 years old in the wild. In captivity, these eagles can live to almost 50!

Reproduction: Golden Eagles usually nest on cliff ledges or high trees. They make their bowl-shaped nests out of sticks. An average clutch ranges from 1-3 eggs, and incubation lasts 43-45 days. After about 66 days, the young are ready to fledge.