The Sutton Center was first conceived in response to the decline of the Bald Eagle (Haliaeetus leucocephalus) in the southern United States. Our actions, which you can read about here, helped to restore our Nation’s symbol to Oklahoma and beyond. Today the Bald Eagles that regularly nest in the Sooner State likely all trace their ancestry back to the eagles that we hatched and raised on our Bartlesville campus. 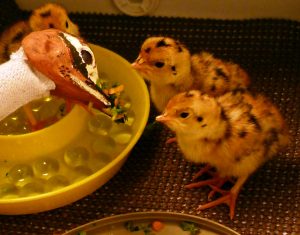 But our mission doesn’t end with this one species. We are continuing to contribute actively to the recovery of other endangered species, using our decades of expertise to explore new approaches to how bird populations that have gone extinct in the wild can be brought back with our help.

A major conservation initiative we have undertaken is captive breeding and rearing setups for the recovery of one of North America’s rarest subspecies, the Attwater’s Prairie-chicken (Tympanuchus cupido attwateri). This prairie grouse was nearly lost forever when habitat losses in the coastal prairies of Texas fragmented the population once numbering in the millions. The species currently holds on in a few select locations, largely because of a long-standing captive breeding program that supplements these areas with hand-reared birds. The approach we have pioneered was able to better ready these captive-raised birds for survival in the wild and recruitment into these populations. This is critical, since existing efforts currently lose more than 90% of released birds before they breed in the wild, which means that the populations are not quite yet self-sustaining.

We are also involved with a similar captive breeding and rearing effort for another gallinaceous bird, the Masked Bobwhite (Colinus virginianus ridgwayi). This subspecies (or perhaps sister species) of the Northern Bobwhite was once distributed in the monsoon-driven habitats of desert mountains and valleys in southern Arizona through the Mexican state of Sonora. Drastic declines since settlement have left this species critically-endangered and, in fact, it may now exist only in captivity at facilities of the Buenos Aires National Wildlife Refuge in southern Arizona, and Africam in Puebla, Mexico. The Sutton Center is working as part of the species’ recovery team to find solutions critical to the species, including: the separation of the captive population across multiple sites; experimenting with diet and environmental conditions in captivity; and studying the thermal ecology of the species habitats to determine if sufficient refugia may be available for the birds to shelter from the desert heat and cold.

If you’d like to contribute to our efforts to actively save species, please consider becoming a Sutton Center member or contact us to discuss major sponsorship or in-kind contributions that you could make.