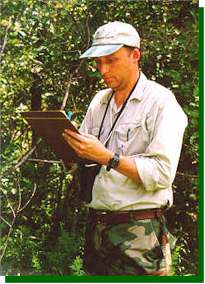 Dan recording the results of a count.

Camp Gruber is an Oklahoma Army National Guard training center located near Muskogee, Oklahoma. A wide range of training activities takes place there for National Guardsmen and other military personnel as well as federal, state, and local law enforcement personnel. One task of the Environmental Section at Camp Gruber is to monitor and maintain environmental quality, including the health of wildlife populations and their habitats.

Over 60,000 acres (24,000 ha) of habitat are available at Camp Gruber, much of it undisturbed except for a network of rough, little used, one-lane dirt roads. About half of this total acreage is available for training use and the other half is set aside as a game management area with limited access by the public.

The Sutton Center was contracted to conduct bird surveys along 100 m transects at 89 randomly selected points distributed between the training portion of the site and the game management area. A comparison can then be made between species diversity on the training site and that off the training site in a largely undisturbed adjacent area. Occurrence of less common species can also be evaluated to determine any preference for one or the other areas.

The surveys took place in May and June, 1998, and again in 1999. On the 89 counts surveyed in 1998, we recorded 93 bird species and approximately 2,750 individuals, including year-round residents and wintering, transient, and breeding migrants. In 1999, we recorded 81 species and 3,289 individuals.

The survey of Neotropical migrant and other species of birds was carried out at Camp Gruber Training Center, Cherokee Public Hunting Area, and Cherokee Game Management Area, on 4 May to 5 June 1998, and again in 1999.The survey was made at 89 Land Condition Trend Analysis (LCTA) plots, red dots on map at left, each of which was visited twice (once in the morning and once in the evening). The observers counted all birds following the LCTA count methodology.

On this and the following maps, the green color indicates forested habitat, and the dark yellow indicates open habitat (grassland, urban / cantonment, and open woodland).

Bird species were divided into five migratory status categories. The numbers of individuals in the wintering and transient categories were low. Of the three categories in which individuals also breed at Camp Gruber, the most frequently detected were resident species, followed by short-distance and then by long-distance migrants.

The bird species were also divided by placing them in five habitat-use categories. The greatest number of individuals was recorded in the forest habitat, with the second greatest number in edge habitats, where forest and open habitats come together. Fewer birds were recorded in the aerial (swallows and swifts), aquatic (herons, ducks, and so forth), and grassland categories.

We present here a pair of maps of species showing their contrasting patterns of distribution at Camp Gruber.Dickcissels occurred only in the open habitat, specifically in the grassland.

Camp Gruber serves as a stopover site for Neotropical migrant birds, but transient migrants composed only about 3.3 % of the total number of birds recorded during the survey. This number may belie the actual importance of Camp Gruber to transients, because transients are less likely to be detected than species breeding in the area.

The habitat diversity at Camp Gruber seems to be generally good, providing large areas of moderately-mature forest, small open patches within that forest, open woodland, much edge, grassland, urban areas in the cantonment, plus marshes, ponds, wetlands, streamsides, and aquatic habitat. This diverse mosaic of habitats provides breeding and foraging areas for many species of birds. Although the entire area probably should not be allowed to return to mature, tall trees, the current trend toward maturing of the forest should be allowed to continue over some fairly large areas.

The following table is a list of all 103 species recorded during the counts in 1998 and 1999 at Camp Gruber.