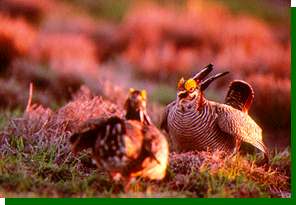 Lesser Prairie-Chickens are found in southeastern Colorado, southwestern Kansas, northwestern Oklahoma, Eastern New Mexico, and the Texas Panhandle. Since the species occurs almost entirely on private lands in those states, the USFWS and state agencies have been working vigorously with private landowners to improve habitat conditions.

From April 1999 through February 2010, we captured and radio-tagged over 900 Lesser Prairie-Chickens in Oklahoma and New Mexico, recorded over 50,000 tracking locations, and located over 300 nests. Additionally, blood samples were taken from captured birds for disease and vitamin surveys, and for genetic analysis. 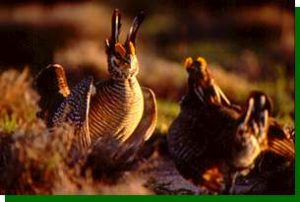 Our field research in New Mexico was completed in March of 2006, and a report is available on our publications page. Our tracking efforts ceased in February 2010 in Oklahoma, but we continue survey efforts, consultations, application of our results to management (for example, see section below regarding reducing mortality from collisions), and analyzing data.

The charts presented below demonstrate the differences observed between study sites as well as between sexes. Note that collision rates are much higher for hens than for cocks. This is especially problematic in Oklahoma, where collisions (including power line and automobile collisions) account for over 57% of the hen mortality.

Mortality causes of Lesser Prairie-Chickens by sex and location


* Based on first year estimate
Since the initial data collected indicated that neither nest success (39%) nor adult survivorship (over 50% annual) could offer a complete explanation for declining populations, we sponsored a graduate student to research brood survivorship and microhabitat use in 2002 and 2003 at our New Mexico study site.
Vegetation data and microclimate data were collected for each brood location, and several random microclimate transects, with data loggers, were monitored. Young chicks received a 0.8-gram sew-on transmitter, and older chicks (30 days or more) received a 3-gram bib-mounted transmitter. The hens with broods selected warmer habitat during cool times and cooler habitat when it was warm. We also found that hens with broods preferred habitat with sand shinnery oak, not only to avoid high temperatures, but also when thermal refugia were not necessary. Areas treated with herbicide that kills sand shinnery oak were avoided, which suggest that shrub control may not be justified for Lesser Prairie-Chicken conservation. Additional details can be found in Bell (2005) and Bell et al. (2010). 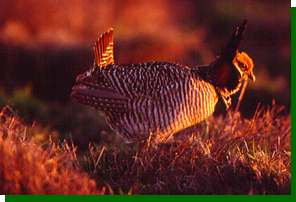 Our surprising finding that more than 40% of Lesser Prairie chicken mortality in Oklahoma is due to collisions with fences prompted a search for a means of reducing collisions. Removing old fences that are no longer needed is one obvious solution, and we are cooperating with landowners in high priority areas to help remove these fences.
Many fences, though, are needed by ranchers, and we began a long process of trial and error to find a durable, relatively easy to install, and relatively inexpensive method of marking fences to increase their visibility to prairie-chickens. Visit our fence marking instruction page to learn our method.

The list of publications resulting from our Lesser Prairie-Chicken research continues to grow. Below are the publications thus far (most are available for download at our publications page). Check back frequently for future results and publications.