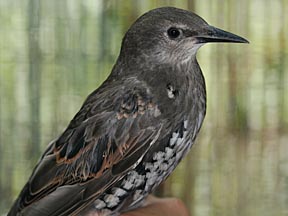 Distribution: European Starlings are found on most continents. In North America, they range from coast to coast and from northern Canada to southern Mexico, usually preferring the lower grasslands over mountainous regions.

Size: Starlings are small black birds about 7.5-9 inches in length with a wingspan that ranges from 11.5-15.5 inches. They have a mass of about 3 ounces.

Lifespan: The longest known lifespan of an individual wild starling is over 15 years. In captivity, however, they can live even longer.

Reproduction: European Starlings nest in cavities or in cavity-like openings in buildings or other structures. The typical clutch size is 5 to 7 eggs, and incubation duties are shared by both adults for 12 days. Young starlings fledge at about 3 weeks of age.