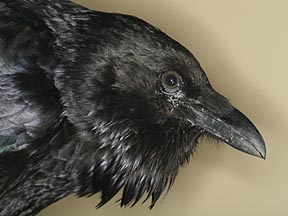 Distribution: The Common Raven is a year-round resident throughout most of Canada, Alaska, the western and northeastern United States, along the Appalachians, and south into Central America.

Lifespan: Ravens have been recorded to live over 13 years in the wild.

Reproduction: Breeding probably occurs at 2-4 years of age. Nests are constructed of sticks, and lined with mud, fur, wool, or grass. Nests are typically found in a tree or on a cliff, but can also be found on power or telephone poles, billboards, bridges, or in and on abandoned buildings. A clutch of 3-7 eggs is incubated, mostly by the female, for 20-25 days. Fledging occurs at 4-7 weeks of age, but young stay near the nest, continuing to be fed by parents for up to 6 weeks.