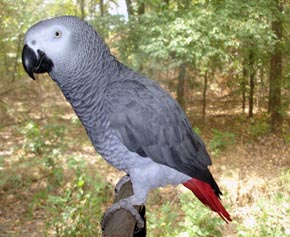 Distribution: African Grey Parrots are found in the central part of Africa.

Lifespan: These parrots usually live for about 20 years in the wild, but have been known to live for over 70 years in captivity.

Reproduction: Breeding occurs at 3-5 years of age. They nest in tree hollows about 2 1/2 – 7 1/2 feet off the ground. The female alone incubates 2-3 eggs for 21-30 days. Both parents feed the chicks until the latter leave the nest around 10 weeks of age. The chicks and adults will then forage together as a family group until the young become fully independent.