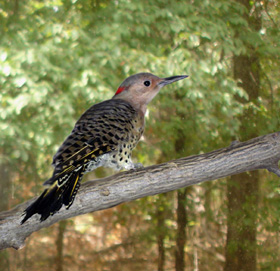 Distribution: Northern Flickers can be found throughout the United States year round and in southern Canada and northern Mexico during the breeding season.

Diet: Although it is a woodpecker, the Northern Flicker feeds primarily on the ground eating ants. In winter, the diet is primarily fruits and seeds.

Lifespan: The average lifespan is believed to be about 3 years.

Reproduction: Flickers first breed around one year of age. They nest in tree cavities (either existing, or new ones excavated by both the male and female). Three to twelve eggs are laid in the unlined cavity and incubated by both parents for 12 days. Both parents care for the young, who leave the nest around one month of age.