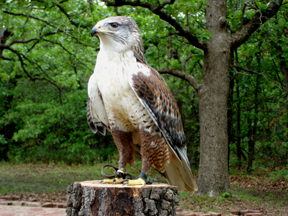 Distribution: Ferruginous Hawks are found mostly in short-grass prairies from southern Canada, through parts of the western and central United States and south into Mexico.

Size: Ferruginous Hawks range from 22-26 inches long, have a 4-5 foot wingspan, and weigh 2-4 1/2 pounds. Males are smaller than females by as much as one-third.

Diet: These raptors prey primarily on mammals such as rabbits, squirrels, rodents, and gophers. They are also known to eat birds, reptiles, amphibians, and insects.

Lifespan: These hawks can live for 20 years in the wild.

Reproduction: Female Ferruginous Hawks lay 3-4 eggs. Their nests, which are made of sticks, are constructed in trees, bushes, on cliff ledges, on man-made platforms, or sometimes on the ground. Incubation is done primarily by the female and lasts approximately 33 days. The young fledge around 6 weeks of age and are mature at 2 years.