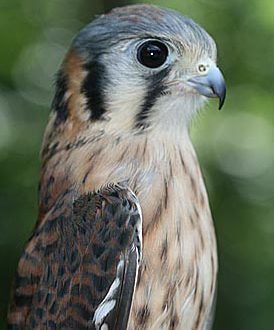 Distribution: Range includes the majority of North America, extending down through Mexico and parts of the Caribbean. They are also found throughout South America with exception of the rainforest regions.

Size: American Kestrels are the smallest falcons in the United States, ranging from 8-12 inches in length with a wingspan of nearly 2 feet. Kestrels have a mass of 2.8-5.8 ounces. Females are generally larger than the males and lack the blue-gray on their wings.

Lifespan: In the wild, the average lifespan of an American Kestrel falls between 2 and 7 years.

Reproduction: American Kestrels nest in pre-existing cavities in trees, buildings, or nest boxes. Average clutch size is 4-5 eggs. Eggs are incubated by both the male and the female for 30 days. After 2 ½ weeks, the young reach adult weight, and fledge after 1 month.